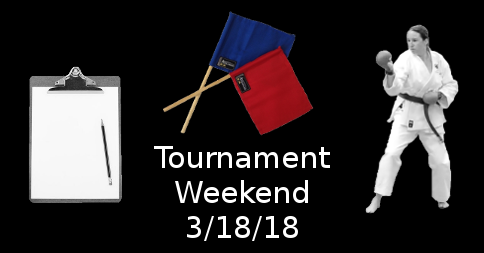 I’ve written about my tournament experiences ten times already on this site. If you look to the right sidebar on your PC and scroll down a bit, look for “CATEGORIES” and click “Tournaments” you can read all of them. The themes vary: narratives that barely touch on anything deeper, funny anecdotes, and even an account of what I did and learned when I was limited to volunteering due to prior injury. Likewise, the last time I went to a tournament I also did not compete but I was in my new role as kata and kumite judge (USA-NKF Judge D). In every single post I’ve written about significant lessons learned. Most of the lessons are about what needs improving in my karate. One was a lesson in life’s little quirks  and another was about a lesson that I learned when I was a teenager that was reinforced at one of my first tournaments as an adult. So there are a good many similarities among the posts. This post will be a bit different – very little narrative, mostly analysis.

My role in tournaments is changing. I’ve been competing and volunteering for quite awhile but now I am also judging. This past tournament was my second time judging but I didn’t spend the whole time doing so. I was surprised by an assignment to volunteer for the first two or three hours. I was needed to help with staging the athletes – a very pleasant task, actually. The powers that be really wanted me there because I’d done well in that capacity in the past. When things slowed down I was released to judge. Then, when it came close to time for my division to be called to staging, I changed clothes for the second time that day and warmed up in staging. I wore three hats that day.

My responsibilities within those three roles (volunteer, judge, competitor) are considerable. During the seminars the day before the tournament I had another role to play – student. No matter which role I play I am representing my Karate organization and Karate in general. People are watching. Cameras are everywhere and videos go on social media. Mistakes are public. This point has been made over and over again in judging/refereeing seminars and pre-tournament officials’ meetings. But of course even as a volunteer working behind the scenes if I mess up the effects ripple outward. It’s a lot of pressure and I’ve been trusted with a lot of responsibility. I take comfort in the fact that I have many mentors – and even some who don’t really know me all that well have come alongside me to guide me when I needed feedback. I really appreciate their investment into my success, and as a bonus my “karate network” grows.

I’ve been networking for awhile but this tournament I connected with a set that I have been a little timid about – those who are among the highest ranked in their organizations. After I audited a judge/referee seminar I got to chat a little bit with someone who is highly placed in the USA-NKF. I raised my hand during a kata seminar and served as a demonstration student so that the instructor could teach us about spotting the kihon (basics) within a kata (form). This meant I got feedback from a seven-time world champion. At lunch I sat down with a very highly ranked Okinawan karate practitioner. I learned a lot about the characteristics and history of Okinawan karate and what to look for when judging Okinawan kata. I competed against a Japan National Team Member and Asian Karate Federation medalist (yes, she made mincemeat of me, I lost 8 to 1). She and I found out we have daughters the same age and promised to see each other next year. I suspect my karate network will continue to grow as I rub shoulders with more and more karateka of all ranks during tournaments and seminars.

I’m getting more out of seminars. I’m spending less time trying to figure out how to make my body move the way I want it to. I have more techniques hammered into my muscle memory thanks to kata (forms). If I’m learning a new way of moving I can compare and contrast to what I already know. A first for me was at one point a seminar leader walked up to me and my partner to suggest that we add something to the sparring drill because we had quickly grasped what had been taught. He was pushing us to the next level and we gleefully plunged right in. When I attend seminars I am now starting to look for teaching ideas and warm-up exercises that I could use in the future. This tournament I gained some insight into how to be even more discerning when judging kata (forms).

I’ve only judged for two tournaments but I’m finding I’m more comfortable judging kata than kumite (sparring). I’m building familiarity with kata that I don’t personally know – and yes as a matter of fact I can judge them and am licensed to do so.  I follow the WKF guidelines (page 31). I’m becoming more aware of details that I need to teach students. I’m building a rudimentary knowledge of the characteristics of different styles other than the one I study. Judging kumite (sparring) is a different story – I’m not as comfortable with that. The section of the rules dedicated to kumite is a lot bigger. It’s fast-paced and I have to make split-second decisions. Of course I accumulated more tips and feedback this past tournament. I do think I have improved a little since the my first tournament. As long as I keep making progress I’ll be satisfied. I’ve been told over and over that every single judge and referee had to stumble a bit until they hit their stride. The rules are still being tweaked, so even the highest World Karte Federation members are still learning!

All this might seem very “advanced” to those who are new to karate, and yes I have made progress since I first stepped into a dojo. I’ve learned a few things but I still have a lot to learn. I know I’ve touched on this before in previous posts, but I’ll write it again: I still am a beginner and always will be. A friend of mine, Clifton Bullard, once heard his sensei say to a newly-promoted Shodan (first degree black belt), “Congratulations – you are now officially an interested beginner.” To expand further on this, Clifton writes:

What he said (as nearly as I can remember it after 30+ years lol) was that it meant that you know how to be a student, so now you must BE that student, and learn how to become something more. At a different point, he said that shodan was not the end of the journey. It meant that now your bags were packed and you were ready to start YOUR journey.

In spite of the fact that I’m moving into more advanced roles and material, I am still packing my bags. Stay tuned to this blog for more!

I began training in Karate in June of 2014 after a 27 year hiatus. View all posts by Joelle White

This site uses Akismet to reduce spam. Learn how your comment data is processed.

I design stuff! Please buy something!