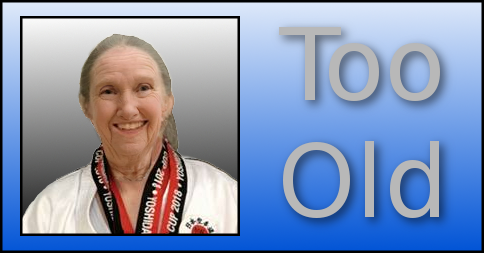 Almost four years ago I was tying on a white belt in the locker room for one of my first few classes. Someone asked if I was the instructor and was quite surprised that I was a brand-new beginner. I’ve lost track of how many times since then people have taken me for an instructor.  Obviously the stereotype is this: everyone who starts martial arts begins when they’re kids, therefore any middle-aged person wearing a gi (uniform) must have been training and teaching for decades. Adults let this stereotype dominate their thinking whenever I invite them to join class.

I have to chuckle at this. I was 44 when I started, and often I hear “I’m too old” from adults in their early thirties. I’m very nearly 48 at the time of this writing. Every once in awhile I’ll hear this from someone older than I am but who regularly lifts weights and dances in Zumba. Sometimes I wonder if they are uncomfortable with living proof that their perceptions of age and Karate are inaccurate. I get the feeling that a lot of them are silently asking themselves, “But isn’t she too old to be doing Karate?”

It is harder now to gain ground than when I was a teenager. I have to fight very hard for even a small improvement in strength and endurance. Even minor injuries take longer to heal nowadays. I’m a little less flexible, but not much less. When faced with a younger opponent it’s obvious I’m not as agile. And yeah, shedding a few pounds would help that. Frankly, none of these limitations are a barrier to my growth. My limitations simply prod me to develop ways to work around them.

Most of the ways I work around my limitations are mental. I have to be patient with myself and set specific, small goals over a longer time in order to improve physical conditioning – and I need to persist in reaching those goals. Injury, while unpleasant, prompts me to think about why it happened and to come up with ways of keeping the rest of my body in shape. Flexibility might or might not improve over time, but as long as I can throw a jodan mawashi gheri (roundhouse kick to the face) I’m happy – I don’t need to post a video on YouTube of myself kicking a can of soda off someone’s head. As far as dealing with younger, more agile opponents goes, there’s a saying:

Frankly, there are a lot of advantages to being “old.” I have a lot of life experience that I bring to the dojo. There are things I grasp intuitively that children struggle to understand. For the most part my kohai (students lower ranked than oneself) take me seriously simply because of my age. Young whippersnappers figure out really quickly that if I can do something and they can’t, they’d better step up their game. I don’t get admonished as much as any given kiddo – but then again it’s easy for me to refrain from picking my nose and bouncing around the room when everyone else is already lined up. The biggest advantage is I deeply appreciate my abilities because I have built my skills in spite of my age.

For the most part the culture I grew up in expected middle-aged women such as myself to already be firmly ensconced in safe hobbies like crocheting. I have nothing against crocheting.  My grandmother’s and my daughter’s crocheting was and is absolutely amazing (and my daughter has won ribbons at the state fair). It’s just that one generally doesn’t get black eyes and broken toes from crocheting. Therefore some think crocheting is “ladylike” and Karate isn’t. Fortunately, the times, they are a changin’ – I can, as a middle-aged matron, join a dojo and be assured that the instructors and students will take me seriously as long as I work hard and am respectful of everyone. Women who trained in previous decades will tell you this hasn’t always been the case. We’ve come a long way, baby. But we still have echoes from the past, and I see it every time I tell a fellow adult woman that yes, you can learn Karate too. I’m not sure this mindset will go away anytime soon.

Karate will be introduced to the Olympic Games in 2020. I’m sure we will see a significant uptick in enrollment of Karate students. However, I predict these will mostly be children whose parents have dreams of seeing their darling wearing an Olympic gold medal. I contend that parents won’t see themselves having fun training alongside their children. My opinion is that there will not be a significant rise in the number of new adult students. I speculate that the Olympics might even reinforce the idea that one must start training as a child, than an adult is already washed out.

I understand how intimidating it is to look at the national and international Karate superstars and compare one’s inexperienced self to them. I know the feelings of inadequacy.  Heck, I even know exactly how scary it is to get into a ring with a superstar who’s won medals in international competitions (and YES, I have had the honor of losing 8 to 1 against such a person in sparring).   Those scary feelings don’t exactly attract adult students who already think of themselves as past their prime.

Don’t get me wrong, I am absolutely thrilled that Karate will debut in the Olympics in a couple of years.  But I believe us karateka should still keep on pointing to all the other great things about Karate in order to attract more adult students. Competition is a big part of what we do, but it’s not the end all and be all of Karate. There are benefits for everyone, including slightly lumpy, middle-aged matrons like me.

That is, after all, what this blog is all about.